In each CWDM channel (in O-band or E- Band), there are 16 sub-DWDM channels at the low-wavelength (Low-Band) side, or the high-wavelength (High- Band) side of each CWDM channel (1271, 1291, 1311, 1331, 1351, 1411, 1431, 1451 and 1471), respectively.
Each CWDM channel has a +/-7.5nm channel width, while the High-Band is defined as the CWDM channel + 7.5nm while the low-band is defined as CWDM channel – 7.5nm. Within the High- or the Low-Band, there are total 16 DWDM channels, respectively, with a channel spacing of about 0.37nm. The MUX (or DeMUX) is based on optical interleaver and DWDM thin film filters. This configuration has wide operating temperature range (-40C to +85C) and superior performance, such as wide passband width, low insertion loss, high isolation, and excellent thermal stability, etc., over AWG technology.BBN International supplies Optoplex 5G PON MUX/DeMUX 50/100GHz Interleaver & 100GHz DWDMs 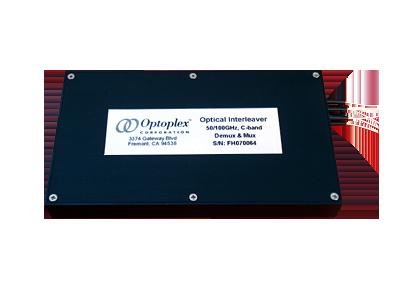 An innovative technique for expanding the number of channels per fiber involves an optical device, called an optical interleaver. For example, in most DWDM equipment, the standard channel spacing is 100 GHz. But spacing the signal-carrying frequencies every 50 or even 25 GHz can double or even quadruple the number of channels per fibre. This job is accomplished by an optical interleaver. Such a device takes two multiplexed signals with 100-GHz spacing and interleaves them, creating a DWDM signal with channels spaced 50 GHz apart. The process can be repeated, creating even denser composite signals with 25-GHz or 12.5-GHz spacing. The signals at the receiving end are recovered with the same devices used as splitters or optical de interleavers. Thus, devices and/or networks can be upgraded without requiring that all devices be upgraded, or network bandwidth can be increased.BBN International supplies Optoplex, fibre optics, fiber optics, standard optical interleaver Product Description - Switchable Optical Interleaver
In a switchable interleaver, there are two operation modes:
Mode A: All pass
Mode B: Interleaver
In Mode A, the system operates at any channel spacing, in which all channels pass through the device and output from one of the two output ports as if there is no extra device inserted. When the system is switched to Mode B, the device operates as a normal optical interleaver, such 50-100GHz interleaver. The working principle is schematically shown below.
In Mode B, the device could be a standard symmetric interleaver, or an asymmetric interleaver. Channel spacings are not limitted to 50-100GHz. They can be any frequency pair: between N-GHz and 2N-GHz.